Note: We are compiling this information to provide background and all pertinent information on the 2012 IRA Regatta for fans at home and those planning to attend.  If we missed something, or there is additional information you think would benefit rowing fans, please email them to webdev@huskycrew.org. 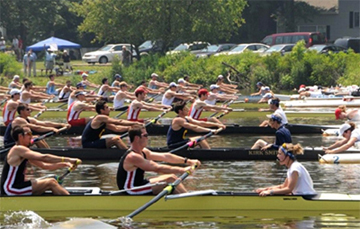 The IRA Regatta was established in 1895.  Washington first participated in 1913, and won their first IRA Varsity 8 title in 1923 - Washington Rowing History - Men: 1920's.  The IRA is governed by members that include Princeton, Washington, Holy Cross, Wisconsin, Harvard and UCSD. (Board of Stewards - ECAC.org).  The races are organized by these members in cooperation with the Eastern College Athletic Conference. 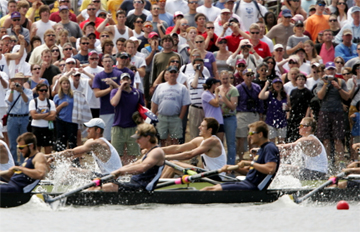 The IRA Regatta is the current National Championship for Division 1 Collegiate Men's Varsity Rowing.  That has not always been the case.  From 1973 - 1994, Washington did not go to the IRA due to scheduling conflicts and other factors.  Harvard and Yale, up until 2003, skipped the IRA to focus on the traditional Harvard/Yale race.  California and Stanford went only a handful of times in those years due to travel costs and other factors.  In 1982, the Cincinnati Regatta aimed to bring together all of the top crews (Eastern Sprints champ, Pac-10 champ, IRA champ etc.) and have one final race.  This regatta was the first real attempt at putting to rest the questions of which crew annually was the fastest, and lasted through 1996, ending as California and Washington both began to find ways to row again at the IRA.  Harvard and Yale began attending in 2003 (finding a way around the traditional Harvard/Yale race, which had previously conflicted with the IRA schedule) and since then, the IRA has featured all of the top ranked collegiate crews in the nation.

The IRA Regatta has been held on the Cooper River at Cherry Hill, NJ, since 1995, except for 2009, when it was raced at Sacramento, CA.  It is now on a 3 out of 4 year cycle where the regatta is on the east coast 3 years, then on the west coast 1 year.  2009 was the first year, in the 100+ year history of the IRA, that the regatta was raced anywhere but in the east (previous locations included Poughkeepsie, NY and Syracuse, NY).  It is currently scheduled to return to Sacramento for the 2013 season.  The 2010, 2011, and 2012 regattas have been or will be raced at the Cooper River course in Camden, New Jersey.

Who:  The following 18 teams have been invited by the IRA Stewards to participate in the 2012 regatta based on regular season performances:  Boston U, Brown, Cal-Berkeley, Cornell, Dartmouth, Drexel, George Washington, Gonzaga, Harvard, Navy, Northeastern, Pennsylvania, Princeton, Stanford, Syracuse, Washington, Wisconsin, and Yale

What:  Five events make up the regatta.  Teams are invited based on season performance, and only varsity programs are eligible to compete.  The events are as follows:  1) Open 4+ (must have at least one frosh rower in the line-up);  Varsity 4+ and this event includes an open invitation to other colleges not making the field of 18 teams.  Additional schools opting to participate include: Columbia, Holy Cross, Georgetown, and Temple;  Freshmen 8 (open to only rowers in their first year of collegiate competition);  2V8 (open to varsity rowers only, no frosh); V8 (open to varsity rowers only, no frosh).  Incidentally, the "no frosh" in varsity boats is a throw back to earlier generations when frosh were not allowed onto varsity squads in many sports.  This changed in 1973 for most NCAA governed sports, but rowing maintained the tradition due to the specific Frosh 8 competition. 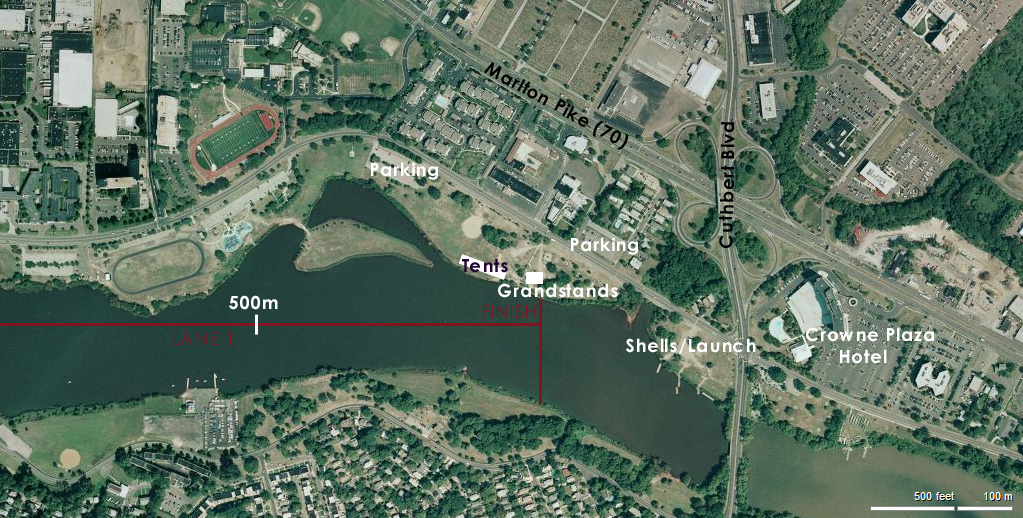 The last 1,000m of the Cooper River rowing course, and Cooper River Park, are shown in the aerial photo above.  The Grandstand/Finish area is fenced in and requires admission (admission in 2011 was free Thursday and Friday; $10 (program included) Saturday - info pending for 2012).  Tents are located along the shore on the north side of the river, and this area, and many other viewing areas, are free all days.  Parking, unless arriving very early, can be a problem;  we recommend staying near the course, carpool or transit.

How It Works:  The course is a 6 lane, 2,000 meter buoyed course, with stake boats and starter's tower at the start.  Progression from heats to semis to finals is different depending on the event. Generally, in the V8 and Frosh 8, the top two finishers in each of the Thursday heats go directly to the semis, the remainder go to repechages (last chance races - the top three finishers in the two reps advance to the semis) in the afternoon.  Check the race schedule to see specific advancement protocols for each event. The wind can affect the course, especially later in the day.  In 2011, there were multiple last minute lane changes at the starting line to accommodate some crews.  Debris, blown from shore, damaged three shells, including some mid-race.  As noted with the weather (below), be prepared for anything.

Webcast:  The IRA has elected to go with a pay-per-view (ppv) program this year, as opposed to 2011 when it was free (and supported equally by ten member institutions, including the UW).  It will cost $9.95 to watch the Finals on Saturday, or $14.95 for a 3-day pass.  More information is here: Pay-Per-View - 2012 IRA Regatta - Community Structure Portal

Weather:  Historically, the weather at the Cooper River NJ site is either hot (90/90 pm heat/humidity or greater), or cooler with a strong tailwind (see 2010 and 2011 results when course records were broken in a number of events).  Some years, due to thunderstorms, the V8 Grand Final is held first thing in the morning (in 2003, the V8 Grand Final was rowed at 7:36 a.m. edt, 4:36 a.m. pdt).  Summary:  be prepared for anything.  Forecast is here: 7-Day Forecast for Cherry Hill, NJ   Wind Update: Weatherbug had the most most accurate real-time wind speed last year: (The Bishop Eustace Prep School Weatherbug location is located near the football field in the photo above) Bishop Eustace, Camden, NJ Weather Conditions & Forecast - WeatherBug.com

Washington Tent:  All information on the Washington tent and food can be found here - if you are planning to be there, please help out! - Husky Crew Parents

Shell Trailer Heads East:  Ever want to know what it is like to drive 2,848 miles across country towing rowing shells?  Watch for tweets and updates here - UW Huskycrew Twitter

Just as a point of reference, here are some of the distances teams will need to travel in 2010, 2011, and 2012 to get to the Men's Rowing National Championships at Cherry Hill, NJ:

From 1952 through 1973, the Jim "Ten" Eyck trophy (named for the famous Syracuse coach from 1903-1938) went to the team accumulating the largest number of points in the varsity, junior varsity and freshman eights.  In 1974, all races (and there were significantly more at that time:  V4+, V4-, O4+, F4+, 2-, etc.) were counted in the scoring under a relatively complicated system adopted by the coaches of the EARC.  This was recently changed, and in 2010 reverted back to a system very similar to the original calculation.

Huskycrew will track the team points live on Saturday, June 2nd, beginning with the Frosh 8 Finals.

Here are some good places to start for more information on the history/results of the IRA Regatta:

Washington Race Results:  Covers the IRA, including audio of race calls and video depending on the year:  Washington Rowing Alumni/Friends Website (go to Race Results tab)