The Huskycrew website was first launched in 2001, a direct result of an appeal by the Rowing Stewards.  Top on the list for communication priorities was a way for alums, friends, and parents to access information about the program - specifically schedules and news - instantly (this was fully ten years before the advent of social media and the mainstreaming of smartphones).  In the fall of 2002, and in concert with our Centennial Celebration, the history project was initiated, with the 100-year history published here in the spring of 2003.  In the years that followed the site grew to include race results, photos and videos, exclusive interviews, the women's history section, and breaking news.

The growth in visitors to the website was steady and strong.  In 2007, Huskycrew worked together with the Washington Athletic Department to bring the first global webcast of the Windermere Cup to computer screens around the world.  Also in 2007, thousands of visitors were online in June as Huskycrew provided the only live splits on the web of the major IRA events.  In February 2008, the site changed the top-level domain from Huskycrew.com to Huskycrew.org, to better represent the non-profit status of the Stewards and the WRF.

With the advent of social media and the ease of real-time information, in 2015 the majority of the content on huskycrew.org was moved to the new Washington Rowing website (washingtonrowing.com), with huskycrew.org remaining as the main source for consistently updated history material, photos and collections.

The site is 100% supported by volunteers.  Our photos and videos come almost entirely from alums and friends of the program throughout the decades, and all writing (except the exceptional women's history written by Ellen Ernst) is done by Eric Cohen. 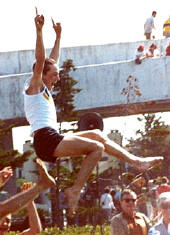 The men's history author is Eric Cohen, a 1982 graduate of the University of Washington and longtime member of the Washington Rowing Stewards.

Eric began as a freshman coxswain in high school (Roosevelt) at Greenlake Crew in Seattle, and joined the Washington Rowing team in the fall of 1978.  At the UW he coxed three years in the Varsity 8, was a three-time Pac-10 champion, 1981 consensus National Champion (competing at Henley), First Team All-Conference (1981), and Co-Captain and Inspirational (1982). He graduated from the UW Foster School of Business in 1983.

Following a career in marketing research, product development, and senior marketing at Holland America Line in Seattle, Eric co-founded the web-based on-demand printing company Directflex.com and also MyTeamBook.com. During that time, he joined the Washington Rowing Stewards (1995), founding the website Huskycrew.org (2001) and writing the 100-Year History of Washington Rowing (2003). He also co-founded the non-profit retailer Husky Crew Gear (2001), and established with classmates Al Forney and Al Erickson the Class of '82 Endowed Scholarship for Men's Rowing (2012).  He is also a co-founder (with the late Blake Nordstrom '82) of the non-profit Husky Rowing Foundation (2013) and continues today as an active member of the Rowing Stewards and as the historian for the UW Rowing Team. 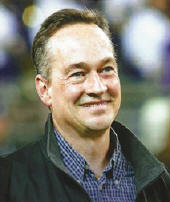 Eric was one of the first contacts for Daniel James Brown as he researched his bestselling novel The Boys in the Boat (2013), with Eric's commentary featured in the widely heralded PBS American Experience documentary "The Boys of '36" (2016). Eric was an invited panel member at both the Chicago and Los Angeles pre-release screening events for the "Boys of '36", and was the panel host at the sold-out Meany Hall event on the UW campus in the summer of 2016.

Since 2016, Eric has continued to share the story of the 1936 team and the remarkable effort of this team, the uniqueness and power of rowing and the growth of individual character, and the takeaways and parallels - to the challenges we face everyday - that can be found in the sport of rowing and the story of The Boys in the Boat.  He has presented to private audiences large and small on overcoming adversity, the power of common goals, and the transformative change that can happen within a team when trust and personal commitment rise above self.

“Rowing taught me hard work for a greater purpose, for a sum that’s bigger than the parts,” says Eric Cohen, ‘82.

Eric is the recipient of the 2016 Cohn Award for outstanding service and support to UW Athletics by a former letter-winner.

The Cohen family bleeds purple and gold. Eric’s parents met on a blind date at a Husky basketball game more than 60 years ago. They raised their family in the neighborhood abutting the UW and Lake Washington, where a young Eric would watch Husky rowers with his dad. His wife Heidi’s grandmother rowed on the UW crew team in 1918. Their daughter, Monica, attends the UW and is a pole vaulter on the UW Track Team.

“I had a strong passion for athletics and wanted to play football, but I was five-foot-four in high school and weighed 85 pounds,” says Eric. “I wanted to compete, and rowing was it.”

Living in the crew house, coxing the Varsity 8 to conference championships and making lifelong friends had such an impact on Eric that he joined The Washington Rowing Board of Stewards in 1995 where he serves as the team historian, wrote a history of the program in 2003, and created the program’s original website in 2001. He consulted on the PBS documentary, The Boys of ’36, and the famed book, The Boys in the Boat. Eric and teammate Al Forney founded Husky Crew Gear to raise money for the program, and along with teammate Al Erickson, they ultimately established the Class of ’82 Scholarship Endowment for Rowing. Eric and Heidi are longtime personal donors as well. Eric credits his teammates — and his wife — for enabling him to devote so much of his time and energy to supporting the program he loves.

“Giving back is almost a requirement after all this program gave me,” Eric says.

Congratulations, Eric, and thank you for all you do for Washington Rowing.

Eric can be contacted at webdev (at) huskycrew.org.