On June 1st, 1909, the Alaska-Yukon-Pacific Exposition opened on the extensive, forested grounds of the University of Washington.  A sprawling - and lively - World’s Fair, the exposition attracted almost 3.7 million visitors to Seattle in the five months it was open, re-shaping the campus into the form it takes today (see 1910's) 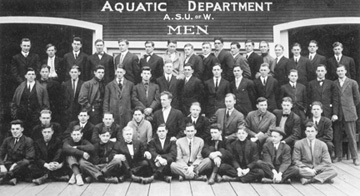 Hiram Conibear, only two years into his role as head rowing coach at Washington and in need of a larger boathouse, saw an opportunity once the exposition closed. He worked a deal to take over two of the exhibit buildings on the Lake Union waterfront:  the men living, eating and rowing together out of the former Coast Guard exhibition; and expanding his women’s program into the adjacent Tea House building.  On January 12th, 1910, the Varsity Boat Club was formed as the organizational structure to oversee that vision, and the teams moved in.

Highest on Conibear’s list of priorities for the VBC was team morale and camaraderie. He believed that not only would the rowing improve, but so too would the students’ overall lives, by collectively sharing the same values both on and off the water.  He also saw it as a key to the overall longevity and health of the program, a connection from generation to generation. “The Boat Club is a reservoir of tradition, sportsmanship and spirit,” wrote Brous Beck ’10 in 1923. “Added to in times of plenty, it carries on in times of need.”

Throughout the decades the VBC played a large role in the growth of the program. When the team moved to the Navy Hangar on the Montlake Cut in 1919, the Club was critical to re-purposing the facility into a rowing center. In 1953, through the influence of George Pocock, the men of the VBC began living together in the newly built Conibear Shellhouse, hiring a cooking staff and sleeping in bunks in the boat bays; by 1965 the two-story west wing was added with twenty-four dormitory rooms.  For over forty years the men’s team lived together at the shellhouse, forming lifelong bonds under the VBC banner.

In 1975 women’s rowing was established as a varsity sport at Washington, and in 1977 the women’s team successfully petitioned the VBC for membership.  Sixteen women were inducted into the organization that first year, and the Club has been governed by men’s and women’s officers ever since.

Members qualify to join the VBC after rowing four quarters at the University, and induction traditionally takes place at the annual rowing banquet in the spring prior to Class Day.  Officers, elected by Club members actively rowing each year, include men’s and women’s Commodore (president); Purser (treasurer); Logger (secretary); and Social/Community chairs.  As the Club has evolved, community outreach, volunteerism, and local outreach have become increasingly important to the members.

Now over 100 years old, the VBC continues as a platform and guide for the men and women of Washington Rowing, collectively encouraging the values of hard work, team before self; and personal improvement. This space is dedicated to those values, and Hiram Conibear’s larger vision: to build the morale and camaraderie among all generations of Washington rowers, joining our past, present and future together under one banner: The Varsity Boat Club.

The team lived there through 1918, weathering the Pacific Northwest winters together in a building originally built as a temporary exhibit (and the thin walls reflected it) for the fair.  Next door, in the former Tokyo Tea Room, George Pocock built shells and the women's locker room was set up.  (More on this decade is here - Washington Rowing History - Men: 1910's and here - Washington Rowing History - Women: 1910's.)  Throughout these times the team grew in strength and numbers.  Strong, lifelong bonds were made, bonds that would lead to Rusty Callow saving Conibear's job at one point, and bonds that ultimately would save the program from extinction following Conibear's untimely death. This photo is from the scrapbook of A.C. Campbell, picturing the men together, on the landing of the VBC boathouse, in 1912.  VBC Collection: UW21869z.

The 1936 VBC, including a photo in the lower right corner of the house they rented and lived in together.  Tyee Photo.

The 1941 Varsity Boat Club Dance.  The VBC dance was a prime occasion in the 30's and 40's, attracting large crowds, held in the Spanish Ballroom at the Olympic Hotel, and featuring top entertainment.  The event was scheduled in early January, immediately preceding full-time training, and was attended by alums, friends, and - of course - the students.  Here Dave Ross's Orchestra plays against the traditional backdrop of sweeps.  Tyee photo.

VBC Commodore Skip John raises the VBC flag over the shellhouse to dedicate their new living quarters.  Fil Leanderson and Dick Wahlstrom, with the support of freshman coach Stan Pocock, initiated the effort during spring break of 1953 that ultimately led to crew members living at the shellhouse year around.  "Stan was the Freshman coach at that time and I was on his squad," said Doug Clarke, class of '56. "Stan was also the advisor to the VBC and suggested the idea to the officers just before spring break in 1953. I was one of the people who moved in (and I lived there for the entire four years that I was at the UW.) Stan arranged for the bunks and their delivery... we had bunks on the porch and in one of the inner rooms of the shellhouse, and hired a friend of my mother named Carmelia MacNichols (Stan didn’t quite get her name right in his autobiography) — a wonderful Italian cook who prepared lunch and dinner during the week, while we made our own breakfasts and fended for ourselves on the weekend."  Tyee photo.

Skip John and Fil Leanderson in the VBC Lounge in 1953. That same photo of Hiram Conibear hung on that wall in the exact same place for five decades (see photo below).  To the left is the letter board, to the right the copper VBC fireplace hood that provided the backdrop for countless events, dances... and the annual freshman head shaving ceremony.  Tyee Photo.

The 1968 VBC with a cameo by Conibear.  Out of the sixties came some of the strongest bonds of fellowship among the men - bonds that exist just as strongly today.  Tyee Photo.

The Class of '82 in March of 1979 on freshman initiation night.  Hiram Conibear exactly where he should be, copper VBC fireplace, and the letterman board... with more names, this time with men and women (see below) combined.  The late Blake Nordstrom - later to become one of the most influential Rowing Stewards in the history of the program - is in the middle of this freshman photo, kneeling, yellow t-shirt with blue collar. Brad Schock photo

The 80's were a decade of transition, yet the VBC continued to serve a central role in the life of the athletes.  The "W" board in the old shellhouse, written on the maple walls, was a testament to the tradition and legacy of the VBC.  Eric Cohen photo.

Men and women of the VBC, on the docks celebrating together, 1992.  UW Athletics photo.